House on the Corner

An Advent Calendar of Stories
December 08 2014 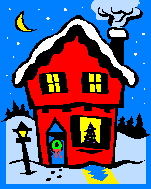 House on the Corner

A thermos of hot chocolate

He hides everything in boxes stacked along the inside walls of the garage and the rafters.
There are no windows. Sometimes there are noises, banging.
The yard has a chain-link fence, and his two large dogs pace a mud path into what was once grass. He mutters. Isn’t one for talk. Doesn't have a wife, works alone. Waits for the cold. Waits for night, his thick fingers uncoiling wire, reviewing plans, considering space, adds a new body to his collection. Watches cars stop from every direction, in a blaze of Christmas lights: Peace, Love, Hope, and his new Santa waving.

About the Author
Dorothy Mahoney lives near the southern most point of Canada and has had two books published by Black Moss Press, and is in several anthologies.


She has a book of dog poems appearing in 2016 with Palimpsest Press. She has an old English sheepdog. This story began on Drablr.
Posted by Debz Hobbs-Wyatt at 17:05

Email ThisBlogThis!Share to TwitterShare to FacebookShare to Pinterest
Labels: A thermos of hot chocolate, An Advent Calendar of Stories, December 08, Dorothy Mahoney, House on the Corner