An Advent Calendar of Stories
December 14 2014 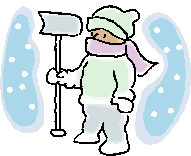 He paced from window to window muttering as the snow continued to drift.
"Killer storm… polar vortex… warming my ass…"
He plunged into the closet and forged out the front door like a warrior, his face masked, his torso padded, his feet in steel-toed boots with treads for deep traction.
When the snow blower wouldn't start, he grabbed the shovel and attacked the sidewalk. None of his neighbors were out. It was like the end of the world, a snow apocalypse. His fingers went numb and his eyes began to water, his chest tightened.
The snow drifted around him.


Dorothy Mahoney is getting ready to battle the Canadian winter. This story began on Drablr.
Posted by Debz Hobbs-Wyatt at 19:16