An Advent Calendar of Stories
December 10 2014 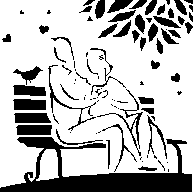 “Monday,” she replied, “Why don’t you pour a drink and join me on the veranda”.
Charles wrote the day down on the piece of paper he was clutching. It was wonderful when Mabel visited, he had become muddled lately, and she made everything seem normal. He glanced at her photo on the mantelpiece. She was tired when that was taken, but now she looked radiant. They sat in companionable silence.
“I am going now,” said Mabel, “but I will come again tomorrow.” And she slowly disappeared back into the Spirit World from whence she came.

Tania Sharman lives in Chingford in East London. She has always entertained the idea of writing a novel, but has always suffered with a ‘creative block’ as the whole process of coming up with an original idea, and then constructing a novel seemed overwhelming. After an inspiring conversation with a friend in a pub about the 100 word stories, she went home, fell asleep, and then woke up at 3am in the morning with the above story unfolding in her head. This is the first story that she has ever written and submitted.