An Advent Calendar of Stories
December 23 2014 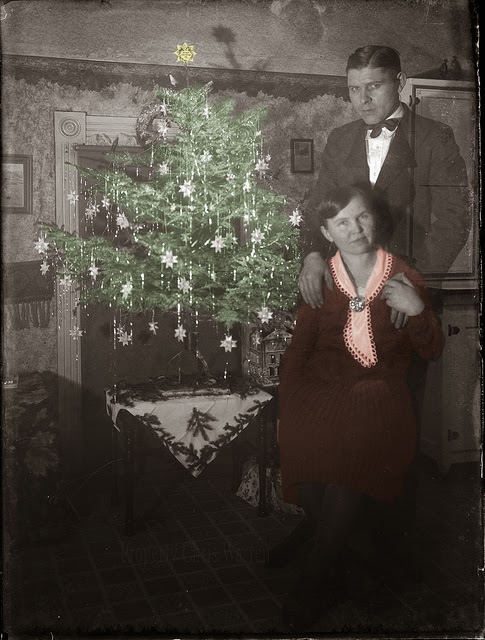 A goblet of Mulled Mead

Julia shivered as if someone had just walked over her grave. She faltered and glanced around.
A good-looking middle-aged man was lounging in one of the hotel lobby armchairs beside the Christmas tree. He was staring at her legs. Julia was a sucker for mature men. Unease forgotten she walked over and sat on the sofa opposite him.
'Are you a participant in the Ghost Hunting Weekend?' she said.
He looked over his shoulder. This action was rather foolish since he was sitting with his back to a wall. He collected himself. 'Do I look like a fruitcake then?'
Julia winced.
'Sorry,’ he said. 'I suppose you're here to look for ghouls and ghosts...'
'And things that go bump in the night,' Julia finished with a smile. 'Actually I'm the Tour Guide.'
He looked quizzical. 'Do you do this sort of thing regularly?'
'What, accost strangers?'
'I meant, do you do regular Ghost Hunts?'
'Actually, no. I usually do Stately Homes.' She leaned forwards slightly. 'Can you keep a secret?'
He nodded. She glanced around before replying. 'I know it’s probably nuts, but this castle has a solid reputation for sightings.' She sat back and crossed her long legs. 'I'd love you to join us.'
'Sorry, not a chance.'
A voice called out, 'Miss Beresford?'
'Oops, they're looking for me.' She rose, then hesitated. 'I'm Julia Beresford.'
'Pleased to meet you, Julia. I'm Jack.'
She paused but he offered no more. 'Well Jack; let me know if you change your mind.'

Julia entered the library to meet her Ghost-hunters. She saw Jack sidle in behind a large potted fig. She hid a grin.
'Ladies and gentleman, welcome to Castle Willoughby's Christmas Ghost Hunt.' She consulted her notes. 'The castle was built in the fourteenth century. In nineteen twenty-three it was converted into a hotel. Due to a long and chequered history there are several ghosts here and sightings are regularly reported.' She smiled winningly. 'However, the ghosts are benign, so you won't be strangled in your beds.'
There was a nervous group chuckle.
'For example, the local village was almost wiped out by the great plague in 1665. It is understood that John Fenton, the head gardener, brought the plague from London. Every Christmas, Fenton walks the grounds in an agony of guilt.'
The Ghost-hunters cooed softly like a flock of pigeons. Julia held up a booklet. 'Your complimentary Ghost-hunters Guide will give you more details.' She glanced at her watch. 'We will meet at midnight for your first tour.' She raised her hand to forestall the guests' chatter. 'May I ask you to move about the castle quietly at night in deference to other guests?' Julia chuckled, 'and we don't want to startle the ghosts either.'

At midnight Julia gathered the Ghost-hunters in the hotel lobby. She noticed Jack in his armchair, watching. The guests were wittering softly and some of the women were giggling.
'I'm going to split you into three groups with different routes because the castle corridors are rather narrow,' said Julia. 'Each group will have a walkie-talkie to communicate with me. In any event, I will circulate between the groups.' She deftly organised them and they obediently filed off.
Julia clipped her walkie-talkie onto her jacket lapel.
'You really think you're going to need that?' said Jack with a glint in his eye.
'No, but I have an open mind.'
'Yes I think you do.' He tipped an imaginary cap at her, grinning. 'Good luck, milady.'
Julia grinned back. Her walkie-talkie suddenly crackled to life and they both jumped.
'Blimey, someone's seen a ghost already,' said Julia with a snort of laughter.
She hurried up the central stone staircase while Jack ambled behind her. Group Blue was huddled around a large American woman. She had a strong southern accent. 'Oh my lordy, oh my lordy,' she kept repeating.
Julia swiftly established that Amy-Sue had seen a white figure dangling from a noose.
'But there haven't been any hangings at Castle Willoughby,' said Julia.
Amy-Sue's husband, Ulis, spoke up, 'You saying my Amy-Sue imagined it? This a haunted castle or not?'
Julia hid her scepticism. 'Well of course she didn't imagine it.' She gave the group a bright smile. 'Isn't this marvellous? Ten minutes into your first tour and a ghost has already materialised.' She patted Amy-Sue's plump shoulder. 'Marvellous. You obviously have The Gift.'
'Aaahh do?'
'Oh certainly you do.' Julia caught Jack's amused eye. Her lips twitched. She led them away along the corridor.
The guests jockeyed for position. No one wanted to be last in the line.

The next day Julia went for a stroll to familiarise herself with the castle grounds. She discovered Jack in the Walled Garden. 'Good morning, Jack. How beautiful this place is, even in winter.'
Jack looked at her appreciatively. 'Beautiful. See any ghosts last night?'
'Not personally, but Amy-Sue did her best.'
'Let me guess. Only she saw ghosts when no one else was looking.'
Julia chuckled, 'but it's amazing how everyone believed her.'
'They believe what they want to believe. You're touring the grounds tonight?'
'How did you know?'
'I visit every year. Willoughby is a regular haunt of mine.' He raised a roguish eyebrow.
'Very funny.' She wagged a finger. 'So you know it's all flummery. You've seen it all before.'
'I thought I had till you arrived. I don't see many like you.'
'That's not what I meant.'
'I know.'
'Are you flirting with me?'
His smile was pure mischief. 'Wrap up warmly tonight milady. It gets chilly when the ghoulies and ghosties come out to play. Especially at Christmas.'
'Phooey.'

Julia addressed the Ghost-hunters. 'We're going to walk the grounds tonight. Past tours have seen the gardener, John Fenton, on the shores of Willoughby Lake and in the Walled Garden. We'll stay in one group because it's best not to use lights.'
'No lights?' twittered a bird-like lady.
'She wants to scare us real good,' said one of the Americans.
'Oh, heaven forbid,' said Julia with a smile. 'Your eyes will quickly adjust, have no fear.'
Julia led them down to Willoughby Lake. In the sepulchral light, the moon cast a lambent glow across the water like spilled mercury.
There was a sudden splash and plop out in the middle of the lake. They stared in round-eyed silence as silver ripples lapped the shore.
'Was it a fish? It must have been a fish,' they mumbled softly to each other.
Eerie soughing whispered across the water. As one, the group shifted back from the water's edge. Someone whimpered.
Then Amy-Sue spoke, 'Oh lordy.' Her back was to the lake. 'Aahh see'd him.'
The group turned around. 'Who?' they said.
Amy-Sue faced them, chins trembling. 'John Fenton.'
'How does she know it was him?' they asked each other. 'How do you know it was him?' they asked Amy-Sue.
They fell silent, all eyes focussed on her.
'He was pulling a… a plough.' She gave a solemn nod.
The mood broke. Julia converted her grunt of laughter into a cough.
'Must be a big strong feller if he don't need a horse to pull his plough,' someone quipped.
'Do gardeners use ploughs?' asked the bird-like lady.
'You folks doubting my Amy-Sue?' said Ulis. 'She's got The Gift. Julia said so.'
All eyes swivelled to Julia. 'I daresay they used all kinds of implements in those days,' Julia improvised. 'Well spotted, Amy-Sue. Marvellous. Shall we move on to the Walled Garden?'
Julia split the group up to fan out around the garden. They had barely started their explorations when three of them collided in the dark and tipped straight into the azaleas. Julia heard an enraged oath behind her and spun around. Jack was striding towards the hapless guests as they struggled to extricate themselves.
'Jack? What are you doing out here?' Julia blocked his path.
'I'm putting a stop to this nonsense before they wreck my garden.' Jack lifted his arms and began to levitate. He rose several feet and floated towards the ruckus. Julia was rooted to the spot, her mouth agape. She was dimly aware of startled screams.

The following morning Jack was seated in his usual place beside the Christmas tree when Julia stormed up. She plonked down on the sofa and glared at him. 'All right clever clogs. How did you do it?'
'Look I had to get those fruitcakes out of my garden.'
'Oh it’s your garden now, is it?'
Jack bowed his head. 'John Fenton at your service, milady.'
'Really? I thought your name was Jack.'
'Jack has been a nickname for John for hundreds of years you know. And by the way, I didn't bring the plague to the castle and I don't wander around in an agony of guilt.'
Julia wasn't listening. 'I can't believe I've been flirting with you all weekend!'
'The attraction was mutual, Julia.'
'Hah! You don't even talk like someone from the Middle Ages.'
'Why would I after all these years?'
'You're nothing but a fake.'
'I'm not, you know.'
'Really?' She leaned forwards to prod his hand. Her finger passed straight through him and connected with the armchair. For a split second she froze. Then she pulled back slowly, holding her finger in front of her as if it didn't belong.
'You've gone white as a ghost,' said Jack.
'Very funny, Mr Fenton.'
'I do my best, milady.' He tipped an imaginary cap at her, and then cocked his head. 'You're the one with The Gift, Julia, not your silly Amy-Sue.' Jack turned translucent.
Julia could see the Christmas tree straight through him.
'You’ve been a surprise and a pleasure, Julia. Happy Christmas. '
He gradually faded out until, like the Cheshire Cat, all that was left was his roguish smile. Then that too vanished.
Julia leaned back in the sofa staring at the vacant armchair. 'Well, aahh'll be,' she said.

About the Author
Susan Eames left England twenty-five years ago to explore the world and dive its oceans. She has had travel articles and short fiction published on three continents including several stories in The Best of CaféLit 3 Anthology.


After seven fascinating years in Fiji, Susan is moving to the Republic of Ireland.
Posted by Debz Hobbs-Wyatt at 17:19

Email ThisBlogThis!Share to TwitterShare to FacebookShare to Pinterest
Labels: A Goblet of Mulled Mead, An Advent Calendar of Stories, December 23, Susan Eames, The Gift