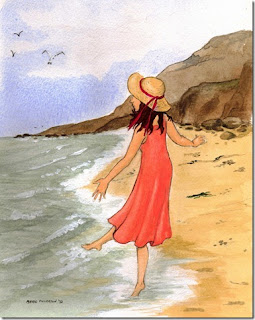 ‘We’ve been here before.’

Mary was sure she recognised the voice. She was alone. On the beach of the remote bay. Alone. And yet, above the sound of the ocean, she heard the distinct voice. She was used to the changing voice of the sea in its various moods, its eternal, incomplete rhythm. Sometimes she wondered if the voices were from the sea. Or maybe just memories; as if the sea made her hear them. She searched her mind for a face or a name for the voice but was frustrated by the curious nature of memory, the tippytongue-ness, the way the mouth begins to articulate a name but the names and faces float just out of reach…

A dark clothed stranger stood high on the dunes at the far end of the bay.

…and she had that unsettling feeling of déjà vu, as if she hadn’t been here before; but she lived here, in the big white house overlooking the bay, had fallen in love with the bay and the house on the cliff when she had spent her summers here as a child and had known then that this is where she would live. She walked the beach every day because she loved the mystery, the spiritual-ness of the shore

High on the dunes the stranger saw the lighthouse flash and remembered the last time he had seen it. Forty odd years of time collapsed into an interval between blinks. As a child he had counted and was thrilled when...eleven…twelve…thirteen always coincided with another blink from the lighthouse, thirteen intense seconds when time was the prisoner of the child. He had gone to sea in his yearning youth and had been drawn back to the bay by a longing, a compulsion to plant his feet here where he had spent so many happy summers as a child. Then he saw something blue - and a big hat - the figure of a woman in the distance. He watched her stroll along the shore in his direction.

Mary meandered over the patches of dark and light on the washed smooth shore. She could see where the to-ing fro-ing sea had made ridges, like a map of mountains with valleys of dry sand.
The past became the present for a fleeting moment when she suddenly experienced the gritty taste of sand in egg sandwiches and smiled at the memory of her picnicking parents in past picture-postcard days watching her play at the sea‘s edge.
She eyed the stranger. The high exposed planes of the dunes always made her think it was as if the land had broken off and fallen into the sea, and she watched him descend them in a sliding lope, leaving elongated troughs down the pyramid of silvery sand onto the beach, watched him walking, stopping, walking, getting nearer to her.

Memories inhabited the air for the returning seaman as if they had been waiting for him. He remembered a little girl. He tried to remember more...yes...we would be about ten.
He watched the woman wading at the sea’s edge picking up shells - scampering when odd waves raced further up the beach. He could see now that her big hat was made of straw and tied under her chin.

In that first childhood summer a boy had ‘rescued’ Mary when she was lying on the beach near to the sea. The boy had thought that she was dead, or ill, or had fallen asleep and in danger of drowning. She was just hugging the earth. They had laughed about it. He, too, spent summers here, and they spent blissfully happy days exploring together, summer after summer, and he talked of how he would go to sea and...

Waves pitched and toppled in the retreating foam of the seaman’s recollections...they had left notes for each other in their favourite cave…

…and Mary was remembering how she had held on to the boy’s hand in the caves because she had been scared. What was his name? She remembered the briny smell inside the frightening caverns, and the flotsam left by the sea every day, like presents for them to find...

...the boy had taken her deep into a cave once and run away and now, above the sea, the seaman heard her echoing scream and felt a pang of guilt.

Mary ambled along the beach, getting closer to him, this intruder visiting her shore. She stood still; listened to the sea and to the screeching terns, and watched a long unbroken roller prowling out to sea, the slate sea like taut skin on muscle as if it was alive.
She hadn’t thought of her ’rescuer’ for many years. They had spent every summer here until ...
Before the memory of that day could flood her mind she remembered that their first real date had been on the bus up the coast to the harbour...

…He remembered the girl - how pretty she was - but couldn’t remember her name, but felt now in this moment the warmth of her hand in his when he had pulled her away from the shrieking gulls clamouring in the harbour, some swooping to snatch hot battered fish from her newspaper…

... she remembered how she had squealed when she saw the silver glitter of twitching fish spilling from nets onto the quayside near to her feet…

...for the stranger time stretched during each soaring arc and in these moments he was at sea again, remembering how ships would pass a mile to starboard full of anonymous people unaware that other souls were skimming briefly into their existence.

Mary thought again of the primary colour summers of her childhood which had lasted for ever, but seemed now to have gone in a blink; and that last summer - that summer as a lipsticked teenager. The roller that had transfixed her smashed onto the sand in front of her with a violent thump, and for a moment she shared the sea’s simmering anger.

The seaman remembered how his little girl of all the summers before was suddenly grown up in that last summer. He wandered along the shore toward the woman and they were very close now, these two strangers on the great expanse of this remote bay.

Mary caressed the bladders of the seaweed in her fingers and remembered the sandcastles the boy had built for her - and how sometimes she had stamped on them in a fit of pique ...

At his feet, a section of tree from an unknown forest had been deposited on the shining wet sand. Two branches had grown side by side like thighs and countless caresses of the sea had smoothed and shaped them...

...and the tang of seaweed always reminded her…of sex…

Mary strolled a small semi circle around the stranger, not too near nor too far, giving him space, thinking that if she caught his eye he might speak. Handsome, she thought, sneaking him a look as she walked by. She lingered, hitching up her long dress and wading into the rippling skirt of the sea.

...the reverie of his first love was still warm in the stranger’s mind when he looked to where the woman was and met her enquiring gaze. He counted between the blinks from the lighthouse…one… two…three...mmm, trim - like the cut of her jib...eight, nine...good looking...ten...wonder if she will speak...twelve… thirteen.

They each turned away and walked.

For a few years Mary had wondered if her seaman would ever return. The day before their last day they had gone to their cave, that echoing cavern of childhood awe, and lovers’ tryst. She had worn her mother’s make-up. And he had looked suddenly so grown up. They had smoked cigarettes and drunk wine, and he had groped and fumbled and she had given in to his pleas.

After that first sexual experience in their cave they had walked along this same light and dark beach, many waves ago.
I must come earlier tomorrow, thought Mary, remembering their last few hours. They had watched the huge red ball rise out of the sea and hover, and it had bled like wet watercolour paint into the sinless white soul of the day and they were so happy in that moment, before they had to say goodbye.
I hope he is happy. He got what he wanted, the sea.

The seaman looked back as he walked to the dunes. The woman was writing in the wet sand near the sea’s edge, behind her the arc of the earth a single thick brush stroke of inky violet on the horizon.

Mary had remembered something else they used to do, she and that little boy. She waited for that odd wave - the seventh, or tenth, she could never remember - that odd wave that rushes further up the beach than the others, and when it came it washed away the letters she had carved with her finger.
She saw the stranger on the dunes.

The seaman waved. He listened to the sea and the gulls for a moment and thought he heard the shrieking of happy children. He took one last look.
At the beach.
At the woman.
At the lighthouse.
Blink.

Bill has poetry published, and two short pieces in Daily Flash anthology, as well as numerous stories on various web sites. In everyday matter of fact situations bill sees in the dark beam - the flickers therein, the mystery and depth of the unspoken.
You can contact him at shamfer@googlemail.com