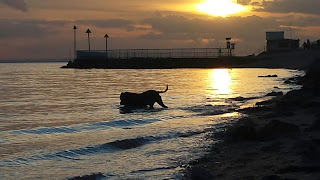 Photo taken on Canvey Island by Peter Goldsworthy
Dog in Sea (or is it a lion?)

Used as a writing prompt by Canvey Writers

I am poking around in the waning afternoon tide of the Thames Estuary searching for a cricket ball my owner, Archie, wants me to retrieve so he can throw it back in again; and they call dogs mutts?
I am a chocolate coloured Labrador with the pedigree classification of Augustus the Divine a tribute hugely contested by Archie’s wife Agnes every time I pee on her petunias.
She says I smell.
‘That dog has the stench of a hippopotamus decomposing in an African mud wallow,’ she once said after much deliberation.
Bloody cheek, she smells like a kitchen aerosol spray. After tying me up outside Boots the Chemists, one day, she checked out trial offers on the perfume counter by spraying the stuff on my back’ saying, ‘Oh I do like that one, Gus,’ or, ‘What do you think of this one Gus?’
To my horror, Sam, an Alsatian acquaintance of mine was witnessing the incident and instead of wanting to fight afterwards; contented himself with derisive barks.
Agnes also alleges I’m flatulent and sprays the air above my basket with Pound Shop disinfectant when I’m trying to take a nap. Occasionally she switches her fumigation hunger onto golfing socks Archie stuffs in his golf bag under the stairs.
But she has a lighter side. At times of warmth and charity, she endears herself to her husband by saying things like, ‘You always smell of something, dear; aren’t you a one? Have you ever considered donating your mortal remains to the Department of Agriculture? Just imagine how proud you would be when you look down upon bumper crops of radishes bearing your DNA.’
‘You’re getting to sound like my old sergeant major,’ Archie replied to her accusation he was rubbish at cleaning his walking boots. Edging closer, she angled her head this way and that like a carrion crow watching as he hacked mud from the boots with a fish slice onto the newspaper strewn kitchen floor.
After the final sweep of his hewing arm, she imperiously said, ’Now chuck the blessed things into the backyard to let enzymes get to them and they’ll smell sweeter than a brace of steam cleaned bedpans in the morning.’
She had been a history teacher in her prime so I’d heard, but she seems to be well up on enzymes as well, preferring to hang Archie’s underpants on the outside rotary clothes line rather than include them in the weekly wash.
Light is fading fast now, and consulting his wristwatch, Archie said grumpily,’ You’ll never see that ball in this light; why don’t we call it a day?’
You will have noticed at this stage I no longer command the name of Gus, and his next statement did nothing to redress the issue.
‘That damned ball will be bumping along the bottom of the North Sea halfway to Amsterdam by now; they must be stacking the bloody things up like Edam cheeses over there.’
As the tide ebbed, mud found its way onto my coat perhaps because I’d rolled in it as a treat for Agnes when we got home.
The finicky back door was having a bad day and refused to open, so as we squelched through the front door, Agnes, not prepared for this subtle alternative showed more umbrage than humour and made personal remarks as Archie led me over her daffodil yellow hall carpet on the way to the bathroom for ritual cleansing.
I do so love these providential moments of release when I can justifiably shake my moulting coat in the bathroom listening to Archie taking the rap afterwards for the unauthorized hirsute change of décor on the walls.


James Sainsbury began writing seriously after completing a correspondence course after which two articles and four short stories were published. Upon retirement, he noticed both little fingers were curling into their palms and was told he had Dupuytren's Contracture; a disease brought over by the Vikings, hence his chosen pseudonym-The Viking- all five feet inches of him; not your average berserker.

Email ThisBlogThis!Share to TwitterShare to FacebookShare to Pinterest
Labels: A bowl of tepid milky tea to slop on the kitchen floor, James Sainsbury, Prussic Acid, The Vengeance of Augustus, The Viking