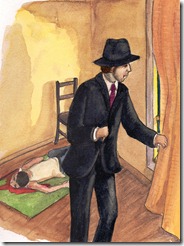 I climbed out of the model A Ford, closed the door behind me and tapped on the side of the car to signal Jimmy to pull away. We chose the Ford deliberately, a car so common that no one would remember. I would have liked to have travelled in style but we couldn’t risk Luigi’s Cadillac, someone would be sure to notice it.

I turned up my collar against the biting wind, pulled my hat down over my eyes and crossed the slush-covered street. It was quiet, but I was still wary. I looked around to check that I wasn’t being followed. I needn’t have worried, only a few people had braved the cold February night. I rapped on a glass panelled door and it was opened almost immediately by a guy wearing greasy trousers and a vest. He was sweating profusely, even though it was freezing cold in the hallway. He noticed my quizzical expression.

‘Laundry,’ he muttered. ‘We have a laundry at the back.’

I grunted and followed him upstairs to a room overlooking the street. My host nodded to the window and turned to leave, but before he reached the door I’d slipped the cheese wire round this throat. He died a minute or so later.

The dirty, single curtain was pulled across, so I stood to the side of the window and inched it open. Whoever had selected the vantage point had chosen well, I had a clear, unhindered view of the restaurant over the road. I pulled up a chair, lit a cigarette, checked my pocket watch and waited for Mary to signal.

At 8.30 I saw the light in the room at the side of the restaurant flick on and off twice. My audience had arrived, it was time to get the show on the road.

I took the stairs two at a time, then stood for a moment to give the adrenalin time to settle. Satisfied, I let myself out, checked the street as I crossed, then walked down the alley at the side of the restaurant.

Mary was at the back door with a smile on her lips and a glint in her eye. She looked good, even in her waitress clothes. She leaned forward and our lips touched. Her scent took me straight back to her bedroom, to one of the many nights we had spent together over the past few weeks. My eyes dropped to that wonderful chest, I felt the sap rise, I wanted her there and then, on the cold floor tiles.

Mary sensed what was going through my mind. ‘Easy Tiger.’

I nodded and forced my mind back to the job in hand.

‘They all here now?’

‘Yep. Frankie arrived through the back about ten minutes ago. He’s at the table with the others.’

I eased open the door to the restaurant and peered in. They were sat in the centre, laughing, drinking the last whiskey they would ever drink.

‘Where is it?’ I whispered.

Mary dragged a case from under the worktable. I opened it and pulled out the Tommy gun. I pushed in a magazine, flicked off the safety catch and smiled at her.

Mary nodded and stood by the door. I winked and she threw it open.

I took a deep breath, stepped into the room and opened fire. The four diners were dead before they had a chance to turn their heads. I fired off another volley to make sure, then turned and hurried back to the prep room.

Mary was by the worktable, a Valentine card in her hand.

I took the card and pushed it into my pocket, then pointed the gun at Mary.

I took in that look, the fear in those baby blue eyes and felt a sharp pang of regret, but pulled the trigger anyway. Mary was thrown across the room, almost cut in two by the hail of bullets.

The cook staggered in from the kitchen, a bottle of hooch in his right hand. I opened up and let him have it too. No witnesses, that’s just how it should be.

I stepped smartly out of the back door and walked further down the alley. I could hear raised voices coming from the front of the restaurant.

At the end of the alley I checked the street, then ran to the Ford where Jimmy was waiting, engine running. We drove to a quiet place by the Chicago river where I shot Jimmy in the back and tossed both him and the gun into the icy water.

I got back into the car, drove to a call box and rang Carla.

‘Well, let’s just say there’s no one left to clean up.’

‘Great, Honey. Come over tonight. As it’s Valentine’s day, and you’ve been such a good boy, I have a nice little something for you.’

It was the way she emphasised the ‘little something.’ I grinned, as my hormones kicked in and visions of a long steamy night filled my head.

Carla laughed. ‘You can have all night, baby.’

I put down the phone and hurried home. I needed to change my suit, get the smell of gunfire out of my nose.

I pulled off my jacket, took the card from my pocket and flipped it open. ‘Who loves ya baby,’ it read. I tossed it onto the table. It might come in useful later.

I ran a bath and thought about Carla. Sweet Carla, the best thing I’d ever seen on two legs. She only had to look at me to get me going. She had brains too, a broad didn’t get that far up the chain of command in Bugs Malone’s organisation without having brains. She was a tough cookie though, failure was punished hard. There were four or five guys wearing concrete under the new highway because they didn’t carry out her instructions to the letter.

Bugs wanted revenge for last year’s Valentine’s Day massacre, when most of his top people were butchered. It was down to Carla to make sure he got it.

I dried my hair on a towel and sprayed on some of the cologne that Mary gave me for Christmas. This was my big chance. I had proved myself as an asset, now I would have the chance to prove myself as a lover.

I stuffed Mary’s card into my pocket and hailed a cab to Carla’s place. She lived above one of the better speakeasies in the flash part of town. There was a lot of activity around the front of the building so I slipped round the back and climbed the iron staircase. The fire escape was open. I stopped on the top step when I heard voices.

‘No mistakes, Greggo, take Mickey with you. Waste him, then drop him in the river. We need to clean up all the crap tonight.’

I cursed under my breath as I realised what Carla meant by ‘a little something.’ I took Mary’s card, tore it up and threw the pieces into the cold night, then pulled the pistol from my inside pocket and flicked off the safety.

I took a deep breath and stepped through the open door.

‘Who loves ya Baby,’ I roared.

Information about the author:


Marie Fullerton is a retired lecturer, with eight grown up children. She started painting 21 years ago and is completely self-taught. She has sold many paintings but has only recently tried illustrating. You can see her artwork on her Facebookpage.
Blog pages…  http://wordangell.wordpress.com/


http://mariesimaginings.blogspot.com/
Posted by Gill James at 17:26